2015 was dedicated to yoga. The journey began in January and the ending in December couldn’t have been better. Looking back now I don’t think I could have done one year in any better way and there is no way I could have found a better place to graduate from as a yoga teacher.

We arrived at Sivanada Yoga Vedanta Dhanwantri Ashram, Neyyar Dam on the 3rd of Oct. Ben and I decided to spend a month at the ashram before the TTC (teacher’s training course) began. We wanted our bodies to be on top form to take all the gruelling of the TTC.

The ashram is situated next to the 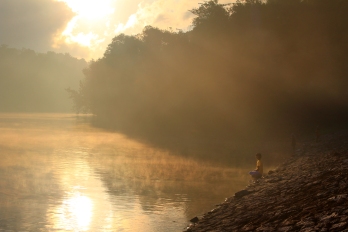 Neyyar Dam lake. The beauty of Kerala all around surrounds it- giant coconut trees inside the ashram and outside, lush green mountains and forests and the vast lake all add to the charm of this beautiful ashram. At first look, it seems you have reached the middle of nowhere but slowly you get used to the surroundings and realise that there could be no better setting for one month of intense yoga learnings.

The first month at the ashram was very demanding for us. We had 4 hours of yoga everyday and 2 hours of meditation and chanting. We were provided two meals a day, which after you get used to is not a bad thing at all. The icing on the cake was of course the Karma yoga that is taken very seriously at this ashram. Nobody wants to be the one cleaning the toilets so you really need your luck to work. Ben and I fortunately landed the serving of food duty. The downside to which was that ours was the only karma yoga that happened twice a day – but we were not complaining. We loved it. It gave us the feeling of having worked very hard at the end of the day.

The staff is amazing. The Ashram is beautifully taken care of and well maintained and everything runs very smoothly. Friday is a day off when you are allowed to step out of the ashram and spend your day at leisure. The ashram also organises trips to towns and sights nearby.

Since we were there almost 5 weeks before our TTC was to begin, we completed two yoga vacation courses. By the end of 4 weeks we were exhausted and decided we needed a break and took off to Varkala, which is a beautiful beach town 2 hours away from the ashram.

This also coincided with Ben’s birthday and happened to be the perfect get away for us. So after celebrating Ben’s birthday in the Ashram with the whole ashram singing for him (it’s a very mesmerising and humbling experience), we took off to Varkala and then Cochin from there.

We arrived back two days before the TTC began, very nervous about what to expect this time around. The good thing was that we already knew the place and routine well, our bodies were well adjusted to the ashram rhythm and we had already mastered the Sivanada Yoga sequence. Before leaving on our one week break we had also met a few fellow students who would join us in the TTC and everything was more or less familiar. But day 1 was still a surprise!

There were 170 of us for the course. The meditation and yoga halls that used to accommodate 50 students at most had now upto 200 -230 people and we were serving 200 people during mealtime, phew!!

The one thing worth mentioning about this course is how well its scheduled and the amount of care the management has taken to make sure it does not resemble just about any other yoga course.

We are provided with our uniformsand learning material on Day 1, which is followed by a very formal initiation ceremony. The next day starts with a very elaborate havan (fire ceremony) and thus begins the course.

To put it mildly, I would say the course is intense. You wake up at 5 in the morning, get ready and put on your uniforms and are at the mediatation hall 5 minutes before 6 for the satsang that goes on till 7:30. You are then served tea after which you change out of your uniform into yoga clothes and reach the yoga hall by 8. The class ends at 10 and then brunch is served. Post brunch is the Karma Yoga duty for one hour. 12 noon is the chanting/Bhagwad Gita class for an hour and you have to be in uniform for it.

After tea/snacks at 1:30, the main lecture begins at 2pm for 1.5 hours after which you run to change out of your uniform and be on time for the yoga class that begins at 4pm. 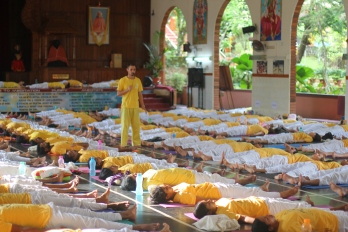 The class ends at 6 and then dinner is served. For a few, Karma yoga is after dinner for an hour and then you again change into your uniforms and be at the meditation hall at 8 for another 1.5 hours – 2 hours of mediation and chanting. The day ends at 10pm and lights out at 10:30pm. By this time you are so exhausted that you can fall asleep the moment your head hits the bed!

Oh wait; did I mention that there is very strict attendance for the whole schedule? Did you notice the number of times you change your clothes? And in case you see that you have some free time here and there, that is when you do your homework; yes, homework everyday without fail! And after all this when you return to the dorm at night your fellow students might not stop talking or even turn off the lights at 10:30 and that is when the whole thing hits you – OMG, 4 weeks of this?!!

But, what an experience! The first week is the toughest and then it all just becomes a part of you. You are always running around but you enjoy doing it. There is also the health hut, which is the ashram café that caters to your hunger pangs between meals. You end up making friends and learn so much about yoga in these 4 weeks that it is overwhelming. Fridays is the day off when you can go into town for masala dosas, or to the beautiful beaches or enjoy an ayurvedic massage treatment in the ashram.

At the end of the course there is a 3 hours written examination for which whatever we have studied in the 4 weeks is tested and I personally enjoyed this part a lot. For me, it was like being back in school. We had to learn mantras and anatomy topics and Vedas(hindu scriptures) and I loved the geekiness of it all.

The graduation ceremony, another very elaborate function, is a humbling experience reminding us that whatever we have learnt needs to now be passed on and that we are just mere instruments in the whole scheme of things to try and make the world a better place.

The 4 weeks change you in many ways. You will come out more disciplined and with a much better understanding of yourself. It was the perfect climax for my year of yoga and as I said before, I’m glad that this is the place that I chose to be in. Ben and I both celebrated our birthdays at the ashram, met so many amazing people, made a few friends, learned so much, tested our limits on so many occassions and in the end came out with all this knowledge that we are now looking forward to sharing with others!