About a couple of months ago I completed my prenatal yoga teacher training course in Mcleodganj, Dharamsala. The school I chose to do this course from, was the Kashmir Shaivism School of Yoga, run by a lovely husband-wife duo, Mr. Amit Raina & Ms. Lina. 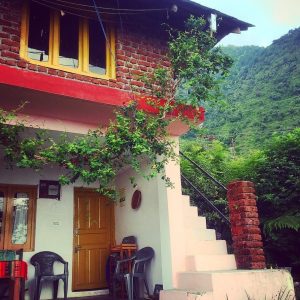 This course was led by Lina, who has almost a ‘shamanic’ like knowledge of a woman’s body and the process of child birth. I am sure there must be other wonderful prenatal courses out there but what made this one so special were these bits and pieces of knowledge that Lina kept giving us throughout the course. She has studied deeply her subject with the indigenous tribes of South America and has a natural remedy for any problem that you can come up with. A strong advocate of women understanding their body and recognising their strength, she has walked the talk by having a home birth for the delivery of their daughter and following the principles of yoga and meditation throughout. Their daughter, Isha, in fact, was born on a yoga mat!

The restorative form of yoga for pregnant women combined with Lina’s in depth knowledge of anatomy and the spiritual influences during birthing, made this course unique and worth sharing. I got to learn a great deal about maternity and child birth and post natal support and so I think I should tell others about this school and this wonderful couple.

Amit has graduated from Gurukula Kangri Vishwavidyalaya, in the sacred city of Haridwar at the faculty of Oriental Studies where he studied the traditional philosophy of Hatha yoga. He then went to Bihar School of Yoga in Munger and received the certificate in Yogic Studies. He is certified by the late B.K.S Iyengar as an Iyengar Yoga teacher. 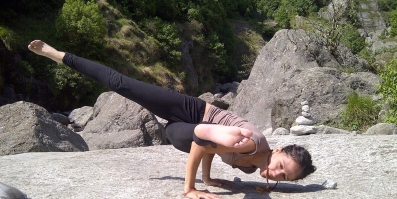 Lina was born in Colombia, South America and is a graduate in Anthropology from the University of the Andes, Bogota. Lina is a Qualified Iyengar Yoga Teacher by B.K.S Iyengar. Lina is also a certified Yoga Instructor by Swami Vivekananda Yoga Anusandhana Samsthana, a Yoga University that specializes in yoga therapy in Bangalore, India.

Here’s a small conversation below with the couple that made this course so rewarding.

How did you both get into yoga?

Lina: I was very active in my teenage years and my parents guided me towards yoga to help me calm down. Later in my life, after the death of someone in my family, I went deeper into yoga as a means to deal with the pain.

Amit: Yoga has always been a part of my family tradition. The spiritual practice was always there, just the asana aspect came later. I went to a place called Pune when I was 16 and found myself living next to BKS Iyengar.  I used to be curious why people were going inside that particular door and I walked in through that door one day and started practising.

How did you two meet?

Amit: I was teaching yoga in Colombia. I had gone to travel across South America but I ended up staying in Colombia the entire time because I made very good friends there. We just met one day in one of my classes, we had a good connection and then we met again one year later. I was sick, I had tooth ache and she took me to the dentist. This was seven years ago. 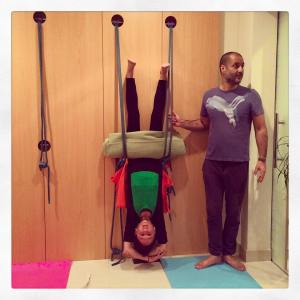 Lina: I took him to my dentist and he didn’t charge him anything!

Amit: yeah and then we started dating. After that she came with me to India and we got married a few months later. It was like an Indian thing. My parent said if you have to date you have to get married so we got married. *laughs*

Lina: It wasn’t exactly like that. Our relationship had blossomed. We were both mature, I was in my late 20s and Amit was in his late 30s so we were ready.

Can you tell us about your experience with BKS Iyengar yoga.

Lina: When I saw him for the first time I was very excited. He was called the lion of Pune because his presence was so majestic. He was the first master whose feet I touched. When I got my certificate from him, it was a very emotional experience. Usually in these traditions you don’t touch your guru but I was so excited that I hugged him.

Amit: For me personally, I have been to many teachers but the only person I always went back to was BKS. Whatever he taught he practised. He is the most honest person I have ever met.

Do you both teach only Iyengar yoga or mix other styles?

Amit: No, we give only Iyengar style classes because BKS always said – teach only one style so that you can become a master of that style.

Can you tell more about this school of yoga?

Do you have any centre overseas?

Amit: No, we have not allowed any centres outside India because we don’t want it to become like a fast food chain. Anybody leading these schools should be well versed with the philosophy of Kashmir shaivism.

You also help a lot of your students set up their own centres, how do you go about that? 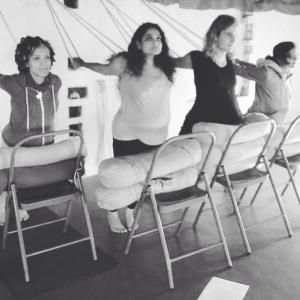 Amit: Some people who practise with us are very dedicated but some people lose track and become very money minded. It’s not wrong to make money but true yoga should be at the core and we can recognize the students who are sincere. So when they open a centre we go there and help set up. We give them material and measurement specifications and other advice. We also make sure they follow our ideologies of non violence, no regression of anyone and complete honesty with students.

Lina: We help them develop new props or choose material as per the availability in their country.

So Lina how is it to be married to an Indian?

Lina: In Colombia we are very family oriented so that way we are similar to Indians. There is this sense of calm in Indians that I have kind of acquired now, that whatever happens it’s alright. Amit, I feel, is a citizen of the world, I can’t say he is Indian or western. He is very co-operative and helps with everything alot. So for me, Indian men are very good. *laughs*

Amit: I look at myself as a very Indian man. I’m very rooted in my traditions, I know all the details of the tradition and I follow the culture. I love this country. It’s a beautiful country.

With the opening of your second centre in Colombia, how do you plan to manage the schooling of your daughter between the two countries?

Lina: I am going to do home schooling for Isha in her initial few years
and travel a lot. I feel travelling and living in nature is the first big school.
Then later on we’ll see what needs to be done. 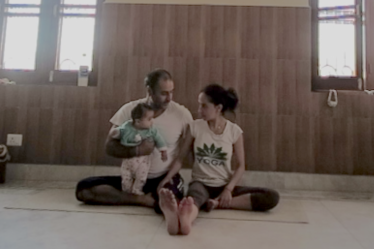 Amit: I believe in giving freedom to a person. I believe it is very important that Lina does what she wants. For me nothing is a problem. I want to live on earth peacefully without conflict so if she wants to live somewhere else I can go there. I’m alright with everything.

Would you like to give a message to yoga students reading this?

Amit: Yoga is a tool of joy. It helps you be in touch with your true self. Be honest and humble and practise regularly.

Lina: Dedicate yourself to the sadhana. Practise and experience are the most important things.